Guys, the time is running fast!

That’s the way Wolfram introduced his Post for the 2nd anniversary of the 4.x series, I think that it’s also quite fitting for today’s event: The 5th birthday of the Magical Fidget Bot!

I still remember the time I had the first idea of the MFBot, which had the working title “Fidgets Magic Bot” for a few months while the bot as still an alpha, created on a paper napkin on vacation.
The in the meantime discontinued SFBot was a bot which was, for me personally and also some friends of mine, good enough, but it also hadn’t been updated for a few months – without any further prospect/statement of whether another update is planned or not, which is still the case.
Since I was looking for a projekt at that time for improving my not-much-to-not-at-all programming skills, I had a lot of motivation to write a bot for Shakes and Fidget, planned to cover all functions of the old SFBot and as expandble as possible.

The first file created for the bot

On the same day I got the insight that there has to be a new bot, I started the work on the small laptop I had with me on my vacation for doing the basic work, taking the SF network traffic apart and collecting ceratin (today not longer current) action trigger IDs in a list – the list which represents the first time of a file about the bot and thus, according to windows, makes the 05/08/2012 around 6pm the time we want to use as very first birthday.
Finding that out was not easy by the may, the unchanged files were still buried on the long unused laptop. 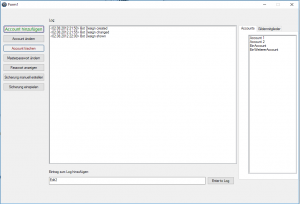 Not even three hours later, I started to create the first code – with the window designer included in the first used (and also longer not developed anymore) “language” AutoIt.
It was a uncouth concept that looked better on the paper and in my head than in the dusty designer, but the controls fulfilled their function for the moment and gave an outlook on what was to be the foundation to start the development.

The development took me a week of vacation and a lot of nerves, but it would’ve taken a few weeks more if Else hadn’t been there with advice and a completed table of action IDs (the above mentioned list) – thanks for that!
(Even though we’ve already spent at least the same amount of time already only through talking, didn’t we? ?)

In the following months until the end of 2012, especially a few dedicated family members and friends were busy testing the, admittedly very thrown-together-looking, alpha-bot and taking it apart – with an adventurousness I wouldn’t recomment today anymore..

Also towards the end of 2012, more people from my circle of acquaintances became aware and wanted to take alook at the bot, which is basically the reason I finally decided to upload the bot, initially intended for the private circle, to a small private homepage even though it threw one error after another and depended on so many files in a single folder that I could only offer it with its own installer.
After further development the beta 1.0 was published on the page on 01/04/2013 (see category “Older posts”, for technical reasons, the article is no longer directly accessible), one month later the bot already got its own domain http://www.mfbot.de and with version 1.6.0 it was based on the language C# and a new Design which appeared much more tidied and even came without explanation of the buttons with its own page 😀

After the design was discarded and replaced the umpteenth time, I actually decided in the middle of 2013 to get together with two great people and form a team – with Alex, who wrote the design which was used until the 3.4.x series and which has only been extended, and most notably Felix who has still remained in the team until today where he is responsible for some important elements of our server infrastructure – and he is also the one who designed our logo which has been used to this day and will be many more days to come.

It took still a whole year until the beta status changed to release with version 3.0, but the release came, and it came fast.
With the same speed, the team (which can be found since the very beginning in the “About MFBot” dialog) changed, great people like Wolfram, who was the first programmer with a lot of experience and who kept great peace with our former code base although it was a big chaos from today’s point of view.
Nevertheless I still think that since he joined the team, he only planned destroying this chaos and give us proper code – as he even could get through with at version 4.0. 😉 😀

Already before that time, Olafson was active and moderated the forum for a long time as he played the most patient (and certainly the fastest blessed with bugs) tester and just like Licor he even was responsible for some code extensions which are still in use today, such as the fight simulation.
The job of Olaf as a very, very, very.. eager bug finder and moderator has been taken very good by Markus in the meanwhile who does just as good work with keeping the forum active and keep us up to date about some things.
One should thank Philipp as well, who had originally offered to write a remote control app for the bot (which hasn’t been finished to this day by the way, hehe) and has become as essential as a core developer like Wolfram over the time.

Because of this I’d like to thank you especially, but also all the other team members (of course including those who are no longer active or could only be active a short time, just like Armin, StrongLucky and Terry, just like masrix as former forum moderator and Orgazmo as developer of the first scrapbook tool and as a support in the forum) that you have done such a great work in the past years and despite some (remarkably rare!) disagreements became such a good team I wouldn’t like to renounce. Honestly!

We have a few things planned for the future (also the closer future ;-)), for the time beeing we’re glad to have such a patient and grateful community and I’m also glad that the bot exists already 5 years (which I wouldn’t have believed back then) and hope we (bot and community :-D) have the possibility to spend a couple more years together.
The last update has been released quite a while ago now and we also see that, but after the summer break we can now put work in the bot again and release a new version soon!

On the occasion on the jubilee, however, we didn’t want to leave you empty-handed and thought of something:
In the last few months, we’ve collected many (really many..) of our best quotes and chat session parts with which we would like give you the opportunity to shakes your heads because of us.
That’s why there are, starting today, four quotes in a widget on the right-handed side and three more per day for the next few months, so we hope you have just as much fun while reading as we had!
Most of them are in german as it’s still the language we use the most as long as no non-german-developer is online but maybe you’ll understand it though.

To the next five years!

This site uses Akismet to reduce spam. Learn how your comment data is processed.

Quotes and chats from the dev corner

Hello everyone! First of all: Happy New Year – albeit with a delay 🙂 . Today we would like to offer you the latest version, 5.4.1 Wisteria, for download. Below you\’ll find the most important n...
View on Facebook
· Share

Read in: Deutsch Hello everyone! With today’s version we addressed the several new features of the past Shakes and Fidget updates and announce the end of our summer break at the same time. The bot i...
View on Facebook
· Share

Recent Posts
Categories
Meta
Manage Cookie Consent
We use technologies like cookies to store and/or access device information. We do this to improve browsing experience and to show personalised ads. Consenting to these technologies will allow us to process data such as browsing behaviour or unique IDs on this site.
Manage options Manage services Manage vendors Read more about these purposes
View preferences
{title} {title} {title}